Laying out a fleece

The story of Gideon's fleece can be found in Judges 6. There's also a great commentary called Faith or Fleeces? by eDevos for Growing Christians.

When I printed my boarding pass at home the night before my Thanksgiving trip, I was pleased to see that I was assigned a seat in the front of the plane, even if it was a middle seat. But I was dismayed to note that I was classified as Zone 7. That meant I'd be one of the last on board of what I knew would be a full flight, and would probably have to check my bag. I had purposely packed light to avoid having to wait (and hope) that my belongings would arrive safely on the luggage carousel. But now with a seat in zone 7, I was out of luck. Even if there would still be room in the overhead compartment, all the space in the front of the plane would be taken by the time I got on board, so I'd have to store my bag over row 27 or 28, and then either push my way back there after we landed, or wait for evvvverybody to deplane before walking back to claim my bag.

Baggage is a small thing, but if you fly frequently, you understand my pain. I was so looking forward to just getting away and relaxing, and the idea of more stress in the process of my vacation was more than I could handle. The last few months have brought an unexpected flurry of bad news and trials in my life and in the lives of those closest to me, and I was exhausted. Just worn out and emotionally drained.

So when I saw the zone designation on my boarding pass, I sighed and rolled my eyes heavenwards. Please, God, I know this is a minor thing, but if you could just take care of this situation for me, make sure I get a place to store my bag by my seat, I would so appreciate it. You know how discouraged I've been lately, and I really don't need another hassle in my life right now. It's hard enough to see Your hand in everything that's going on right now, and I need You. Whatever happens, I'll deal with it and have a cheerful heart, but Lord. Please. I claim your favor in this. Please take care of me. With that, I handed the situation over to God and refused to give it further thought until I arrived at the airport.

I did indeed get a place for my bag that was right over my seat. That's because I was the eighth person to walk on the plane, and was given permission to choose any seat I wanted.

The airport was crowded, but I had already determined that I would have a positive attitude, and made a point to do whatever I could to alleviate the stress of the people around me. I helped the lady at the security gate fold up her stroller and stuff her baby bag onto the conveyor belt. I smiled at the impatient man behind me and let him skip ahead in line. I lamented the crowds and high prices with two elderly couples at the gate, assuring them that all their troubles would be worthwhile once they saw the look on their grandkids' faces. 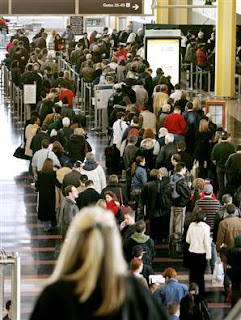 I was helping a woman with a thick Venezuelan accent decipher her boarding zone at the gate when the announcement was made. The lady and I were being jostled forward by the crowd, which was surging towards the gate even though the aircraft hadn't even deplaned from the previous run. People were tired, irritated, and complaining loudly. A flight attendant got on the microphone.

"Ladies and gentlemen, we're going to be flying a smaller craft to Laguardia this afternoon. That means that half of you will be on the 4 pm flight as planned, and the other half of you will be taking the 5:25 flight." We looked at each other, stunned. How were they going to decide who stayed back? "We'll be boarding according to sequence number. Everyone whose boarding pass says numbers 1-150 will go on the 4 pm flight, and everyone with 151 and above will take the later flight." I scanned my boarding pass feverishly. Sequence number? There wasn't a sequence number! I showed my pass to several people nearby, all of whom had airline-printed passes with clearly labeled numbers. I definitely did not have a sequence number. Now what? I breathed. God, you're in control.

The flight attendant was back on the mic. "Passengers, if you have a boarding pass you printed at home, your sequence number is labeled as CN". I looked down. I had a CN. It was 8.

Eight. I had printed out my pass the night before. I had been the eighth person to check in online. I was number eight. I was going on the early flight, and I was going to board eighth!

The woman from Venezula was number 163, and I felt horrible for her. I explained as best I could what was happening, then excused myself to get up to the gate's door. As I handed my boarding pass to the attendant, a thought struck me. "Will I still sit in my same seat?" (Yes, I sounded like a first grader re-boarding the school bus at the conclusion of a field trip.) The flight attendant nodded. I frowned. "But...if this plane is smaller, then everyone in the last ten rows won't have a seat. Their assigned seats don't exist on this plane, so we CAN'T have the same seats."

Apparently no one at the airline had considered this. "Sit wherever you want," she whispered to me. "We'll get most people in their places, then announce that it's open seating."

So there I was, eighth on board, entering an empty aircraft. I chose a window seat (Hah! No middle seat for me!). It was in the fourth row, right behind first class. The leg room was double that of the normal seats. And the overhead bins were entirely empty. I slid my bag in and collapsed into my seat, marveling at how such small favors can make such an enormous difference in the course of a person's day.

One of my favorite things to do on the plane is look out the window and listen to worship music on my iTouch. I never get tired of seeing the beauty that is earth from a distance. I've seen dozens of thunderstorms that lit up the night sky in powerful displays, and I've watched the sun rise over the ocean on many, many mornings. But this particular trip was nothing less than spectacular.

The flight took off about an hour and a half late, right when the sun was starting to set. Inexplicably, we flew about 40 miles west before heading north, past all of civilized South Florida and over the uncultivated Everglades, the Rivers of Grass. This was the first time I saw the 'glades from the sky, and it absolutely took my breath away. Indescribable--the way the sun reflected off the unique surface that is both land and water. As corny as it sounds, the sight brought tears to my eyes. I thought to myself, it doesn't get any more beautiful than this.

And then, it did. Every sight I saw was more incredible than the one before, to the point where I thought, certainly THIS one can't be topped, can it? As the daylight disappeared, I thought surely the views would become less vibrant and electric. Yet each moment outdid itself, until the sky was completely dark and all I could see was the waning moon. I can't recall now each view that I saw--I just know that the way the sun set down through the clouds was the most amazing and eventful sunset I'd seen. 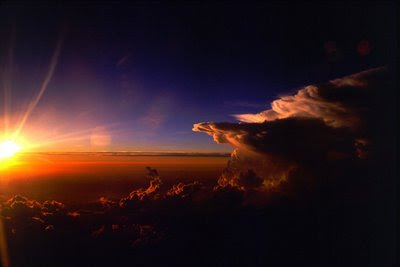 If I had gotten bumped to the later flight, and been forced to sit in the last row in the middle seat that doesn't recline, and had my bag checked and thrown under the plane...God would still have been God. I don't expect deliverance from all my trials every time. But in a moment of quiet desperation, He responded to a request for a sign. YES. I'm still here. I've still got you. I have a plan for you. I'm never going to let you go. You think THIS is good? Wait and see what else I have for you. This is just a small glimpse of what I have in store.

There's been more bad news and discouragement since Thanksgiving. But when I feel like giving up, I remember what He did for me at the airport that day. His quiet, gracious favor that shone through in the middle of the chaos that was wreaking havoc on nearly everyone around me. The beauty that I was privileged to see. The still, small voice that resonated throughout the trip. That memory will stay with me for a lifetime.

Our God is a loving and patient God who knows our weaknesses. The problem is never with God's power; it's with our perception of it. Thank you, Lord, who letting me perceive You for who You are.

Thank you for posting such a vivid story of your trip at Thanksgiving. I felt as if I was there with you. God always seems to outdo our requests and make them even more than we ourselves could ever imagine. I just love that God is so limitless! Thanks for sharing. Also, I will be praying for you and your family. Even though I do not have any idea as to what is going on I will be praying for God's peace, wisdom, and comfort in these times for you. Thanks again for being such an inspiration to so many!!

Beth-God truly is good all the time. I prayed for you-my sister- in- Christ- in- Florida today, that your troubles would be easier, that you would have peace about your situation, and patience with your students. Hope things are improving!

For several years, I've entertained the idea of writing devotions for teachers, based on my faith in Christ, but I've held back because many of my colleagues are not Christians. However, this blog is the kick in the pants I needed to go ahead with the project. Thank you!

Thank you so much for your blog entry Laying Out the Fleece . I struggle a lot with how I perceive what God is doing in my life. My husband died some years ago by suicide and I am still trying to deal with the loss. Although I hide it from most people I feel that some days it seems like God must have forgotten me because the pain is so bad. It is very hard to understand with my head how this was in God's plan but my heart knows there is a reason for it all. Your entry touched something inside of me when I read "Our God is a loving and patient God who knows our weaknesses. The problem is never with God's power; it's with our perception of it." I really enjoy all of your "cornerstone" entries but this one really touched me in a personal way and I want to thank you.

I just found your site the other day. I was looking for a devotion to present as it is my turn to speak in our morning meetings as a staff. I can't wait to tell them all about you and your great site. I'll be visiting quite often. LB