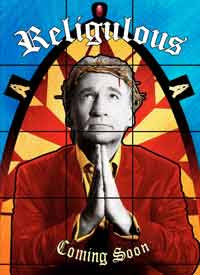 If you haven't seen the trailers for Bill Maher's new movie "Religulous" yet, you will soon. Larry King interviewed Maher on CNN about 3 weeks ago, and I've been mulling over how to respond. Normally I can take some jabs at Christianity because, after all, some human beings have perverted God's word in many different ways and there are definite shortcomings within the imperfect church. That's not a secret to anyone.

But I'm finding this interview and the movie clips they're showing to be deeply saddening. Maher calls Christianity "the ultimate hustle" and says that our society can't move forward until we get rid of "the man behind the curtain". He asks provoking questions such as: Why doesn't God just defeat the devil? What's the point of church? Should people who believe in a talking snake be running our country? These are legitimate questions, but unfortunately, many of the people he interviews in the movie are totally unable to defend their faith. He interviews a senator who completely crumbles when faced with basic questions and finally concedes to Maher, saying sheepishly, "There's no IQ test for being a senator".

What God has laid on my heart is this scripture from I Peter, about always having a ready answer for those who ask about our faith. We have to know what we believe and why, and be prepared to have intelligent discussions that are worthy of our Creator.

"But in your hearts set apart Christ as Lord. Always be prepared to give an answer to everyone who asks you to give the reason for the hope that you have. But do this with gentleness and respect, keeping a clear conscience, so that those who speak maliciously against your good behavior in Christ may be ashamed of their slander." (I Peter 3:15-17)